Ragaa had long since forgotten the first time he sat foot on the Chapel or the life he once led prior to that. Like so many before him had he ventured down into Under Chapel, lured by the promise of wealth and glory. Every day he pushed further. Forever deeper; past the Orphic Catacombs to the blighted Undergrowth. There he lost himself in its hallucinogenic mists.

Days turned to weeks; weeks to months; and months and years as Ragaa struggled against the dark denizens of the Chapel. At first he didn’t notice it and at the end he didn’t care. His body transformed, slowly adepting to entropic environment of the Undergrowth. He had become decay.

In a way he’d found what he was looking for – renown. That was the true transmutation. He had been Ragaa to no one but now he was the Plague Assassin to all. Feared and rightfully dreaded, a killer and bounty hunter known simply for his impeccable record.

The Red Queen had now tasked him yet again. This time the quarry was a man that got away. A man that once held a map only he could read. The Red Queen wanted the head of that man and all the secrets inside returned to her. Ragaa would see the Red Queen’s will made manifest.

Very much inspired by Heresy30k’s Rotting Servitor I decide to revisit one of my Plaguebearers. I knew that I wouldn’t make a servitor – I already have three pretty weird ones for my Horrors of the Undergrowth Warband and, quite frankly, I couldn’t see myself topping Heresy30k’s so I took it down another route. A bit shooty, which I need in the Warband, and slightly smaller too. But not any less weird I hope. I think he will fit right in.

Pretty pleased with Ragaa the Plague Assassin. I needed to sculpt a new arm because … you know … as I cut off the old arm to reposition it the bloody thing fell off the table and went subatomic the instant it hit the floor. How does that happen? Bits going Keyser Söze like that. Oh well, when sculpting rot and decay you need to push yourself to fail.

It was a quick conversion. If you feel like I missed an opportunity here let me know. 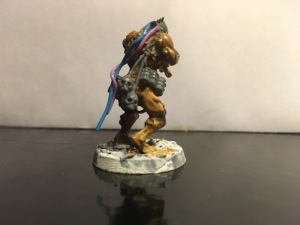 Since the colours are pretty much everywhere on this one, I’ll give a couple of moody black and white shots too.