I’ve finished building, sculpting and converting my brand new Chaos Legion Praetor. First thing I did was to shorten and slightly reposition the arms and mace. You guys didn’t make it easy for me as I had a hard time deciding from the start. Some of thought that I should keep arms and mace as they were and some of thought that I should shorten them. My gut said shorten them and I just went with it.

And once you start cutting you’re basically past the point of no return and all you can do is push forward. I still think it was the right call, the more compact feel of the model adds to its brutally. Hopefully you dig it too. 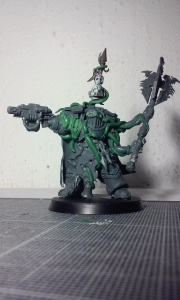 I roughed up the cloak a bit, some holes, rough edges and a layer of Liquid Green Stuff to create a more textured and worn surface.

Death to the False Emperor!